Where the Woods Meet the Water

Where the Woods meet the Water is the second part of an autobiography written by Gila Margolin. Born into an orthodox Jewish family in 1951 in London with grandparents from Scotland, Sweden and Russia, Gila learned to love the Synagogue and the Jewish festivals and later considered becoming a Jewish Cantor.

Her first book, The Moving Swan, published in 2006, describes her childhood and her move to Glasgow in 1962, where she encountered her first Christian influences and went to Glasgow University. This turbulent period in the late 60's ended with a mssive but cathartic nervous breakdown, which led her bck to her singing and her move to Cambridge, UK in 1982. There she studied Hebrew at Lucy Cavendish College in the University. She became a Catholic in 1989 and in 1999 cofounded The Little Sisters of Joy, initially as a new community of Prayer, Peace and Reconcilliation within the Catholic Church.

Where the Woods meet the Water, which is the meaning of "Toronto" in one of the native Canadian languages, describes the unfolding, in diary form, of this enterprise, documenting some of her key writings and charting her journeys, as she travels to Europe and Canada to spread the work of building bridges of Peace. In 2004 The Little Sisters of Joy evolved into a Foundation, ecumenical in that it reaches out to "the known inhabited world".

The Little Sisters of Joy has been building bridges between Jews and Christians, Jews and Arabs, Muslims and Christians and Catholics, the Orthodox and Protestants. Music, Friendship and Encounter are the key elements and Gila and her fellow musicians have given a series of Concerts for Peace and Reconcilliation in Cambridge College Chapels and elsewhere over the last 11 years.

As usual, Gila wove into her life story the music of the 60's, Jewish music and folk music, beginning with her childhood and the song of the angels on the Sabbath. The audience joined in with "Blowing in the Wind", "Last Thing On My Mind" and "Last Night I Had The Strangest Dream"; a beautiful anti-war song by Ed McCurdy, really the "father" of modern folk music.

One of the most powerful songs was "Gesher Tsar Meod", a modern melody composed to the words of the famous Rabbi Nachman of Bratslav:

"The world is a narrow bridge; all we have to do is not fear anything."

Another moving piece was "Donna, Donna", originally written for the Yiddish theatre in new York in the 1920's and translated into many languages around the world. It speaks, among other things, about oppression and the need to be free:

"But whoever treasures freedom, like the swallow, has learnt to fly..Donna, donna"

A gathering of 50 Friends attended the Launch in Lucy Cavendish and a smaller but very diverse group came to the George Ignatieff Theatre in Toronto.

After the performance people talked to Gila and bought books. 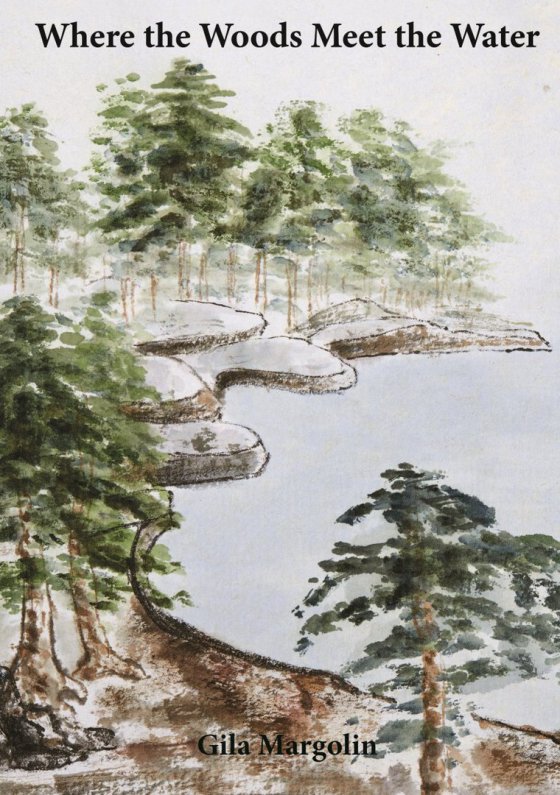 The cover picture for "Where The Woods Meet The Water" is from an original painting by artist Anna Bristow.

The painting is an illustration of the Laurentian Shield.